Here we are in Chicago - ironically on hometown boy, Barak Obama's 500th day in office as President of the United States.

If you read yesterday's post, you will remember that one of the first things we noticed about Chicago as we drove in was the massive Willis Tower (formerly the Sears Tower prior to 2009). Accordingly, this was a good place for us to start our day today.

The 108 story tower is 262 Michael Jordans tall so says the sign in the lobby after we purchased tickets to the SkyDeck located on the 103rd floor. 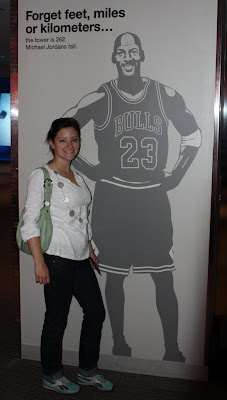 The view is spectacular, which is what one would expect 412 meters (1,353 feet) above the ground. 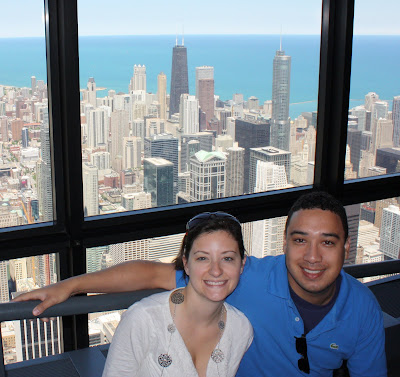 There is even a place on one side of the SkyDeck where there are reinforced glass boxes which extend outward from the edge of the floor allowing you to see straight to the street level. 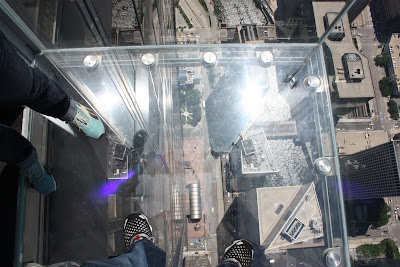 Back downstairs of course we we directed to walk through the giftshop which sold all the usual things as well as some more unusual items. 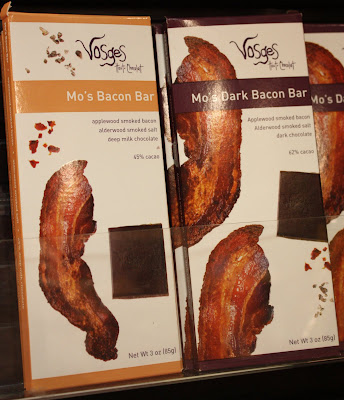 After Willis we walked around the city a bit. We stopped at Millenium Park which is on the east end of the City. 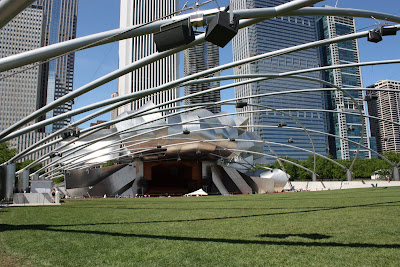 The park contained a variety of performers, artwork, horticulture, interesting architecture and local iconic symbols. One of the performances was a puppet show featuring stuffed animals who specialize in irony.

By this point in the afternoon, I had become saturated of walking around and I returned to the hotel. Tam continued exploring although I understand she didn't find much else interesting and decided therefore to go shopping.

I had bought a ticket to see the Chicago White Sox host the Texas Rangers at U.S. Cellular Field (formerly Comiskey Park), so I donned my Montreal Expos sweatshirt and hopped on the L-Train. (Tam wore her Montreal jersey back at the hotel room in solidarity). 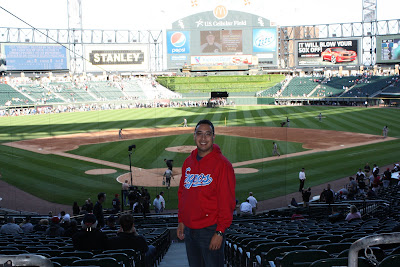 Relative to the two other MLB games I saw, this one was fast - only 2 hours and 27 minutes long. It was a much more low scoring affair (4-3) and fewer exciting plays but there was still enough action to keep me interested. 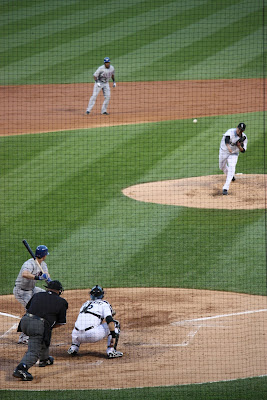 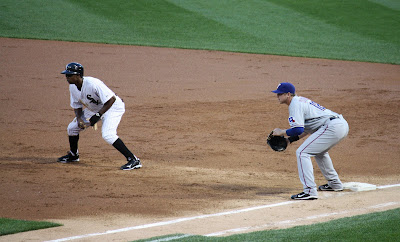 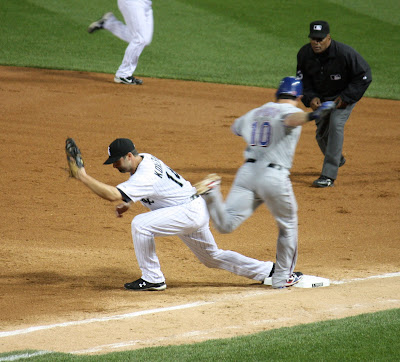 On the subject of baseball, I feel the need, yet again (for the second time in two nights) post a brief editorial comment.

Last night there was an unfortunate incident in Major League Baseball.

Armando Galarraga of the Detroit Tigers was slated to throw a "perfect game". For those of you who are not familiar with baseball - a perfect game is the most difficult thing to accomplish in baseball - possibly in all of major professional team sports. It is a game where a pitcher confronts all 27 batters on the other team (3 outs x 9 innings) and retires them (either himself or through his team) successfully without any batter reaching base legally.

It has only been done 20 times in the history of major league baseball.

Last night in Detroit, 26 of 27 batters were out of the way when a ground ball was hit to the first baseman. He fielded it and threw it to Galarraga who was covering the base. Galarraga stepped on the base a clear split second ahead of the runner which should have ended the game. Jim Joyce, the 1st base umpire, quickly signalled "safe".

This would have been the first perfect game for Galarraga and the first for the Detroit Tigers franchise.

Following the game, Joyce, still in his umpire's uniform did what very few professional umpires have ever done: he found Galarraga in the dressing room, hugged him and apologized.

Today, as virtually all sports media were covering this story, attention quickly turned to Bud Selig (the commissioner of baseball) to see if this would be overrulled. Sadly, it appears as though Selig will do nothing more than 'look into the possibility of expanding the role of video replay in baseball' [me paraphrasing].'

As someone who has umpired baseball for over 17 years, I can state authoritatively that the issue is much simpler than it seems.

A judgement call in baseball is final and is not subject to any review, argument or protest formal or informal. To quote the official rules of baseball "9.02(a) Any umpire’s decision which involves judgment, such as, but not limited to, whether a batted ball is fair or foul, whether a pitch is a strike or a ball, or whether a runner is safe or out, is final. No player, manager, coach or substitute shall object to any such judgment decisions."

Moreover, video replay has been largely resisted in Major League Baseball - only recently has it been added to a very narrow set of circumstances (obviously not including the present situation).

So at first blush it would appear as though Selig would have no choice but to deny any request to allow the call to be reversed.

But ending the analysis there neglects to fully understand the rules of baseball. There are two factors which must be considered:

1. The umpire agrees he made the wrong call
2. Reversing the call would not change the outcome of the game

I agree, reversing this call opens the door to potentially creating a precedent which is very bad. There are countless calls every year which upon review of a replay it is clear the umpire made a mistake. I am not suggesting that we should create a precedent for revisting those calls. Rather, baseball already has a precedent for revsering calls where the umpire who made the call is satisfied that the wrong call was made.

This is founded in the rules. At the very end of the rule book it says under the heading "General Instructions to Umpires": "Each umpire team should work out a simple set of signals, so the proper umpire can always right a manifestly wrong decision when convinced he has made an error. If sure you got the play correctly, do not be stampeded by players’ appeals to “ask the other man.” If not sure, ask one of your associates. Do not carry this to extremes, be alert and get your own plays. But remember! The first requisite is to get decisions correctly. If in doubt don’t hesitate to consult your associate. Umpire dignity is important but never as important as “being right.”"

An umpire is never overrulled by his partners but he may, after consulting with his partners reverse his own call. Although it would be highly unorthodox, why not allow this umpire to reverse his call in the day or two which follows.

Secondly, there are situations where a call simply cannot be reversed for practical reasons. Consider a situation where a batter hits a long shot down the line but the umpire calls it a foul ball. The batter, despite being angry, stops running. Other runners stop running. The defensive fielders stop pursuing the ball. Perhaps a ballboy throws the ball to a spectator. In such a situation there would be no way of undoing the result of the bad call. The current incident is not one of those situations.

I am not suggesting that Selig allow the call to be reversed because it is the only right answer - obviously maintaining the status quo is a safe, non-precedent-setting approach but it is not the only way this situation could be handled, as I have explained above. Reversing the call would be similar to the 1940 college football game where the referees incorrectly gave the winning team one extra play which resuled in the win. When it was discovered, the team that benefitted from the mistake forfeitted the game.

In short, I am not suggesting that Selig allow the call to be reversed because he has to; I am suggesting that he do it because (1) it can be done, both practically and according to the rules, and (2) it is the right thing to do.

Tam and I are going to be changing hotels tomorrow and moving about 10 miles to the suburbs. Still in a Hilton but a more reasonably priced one. This was a pre-planned decision; apparently our current location downtown jumps from about $150 a night to $560 per night on Friday and Saturday nights.

Keep following as we continue to experience the windy city...