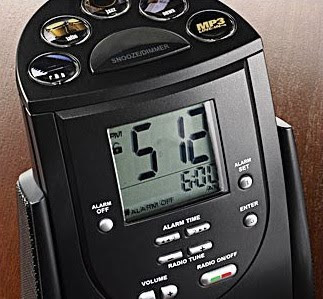 When Tamara and I arrived yesterday at our hotel in Virginia Beach, we unplugged the alarm clock because we needed the extra electrical outlet near the bed.

We unplugged it around 5pm.

Interestingly enough, the clock and radio still continued to work even while it was unplugged. Must be a "battery back-up" one might suggest. A reasonable suggestion,

This suggestion poses two additional questions: (1) how long does this battery back up last and (2) what are the consequences once the battery dies?

Neither of these questions crossed our minds as we did not plan to use the alarm clock.

Nevertheless, we learned the answer to both of these questions this morning.

The answer to question #2 is as follows (or at least this is how I imagine the instruction manual to read):

This particular device, when its battery back-up dies, launches into the most horrifying, ear piercing, shrill tone which is about 3 times as lound as a normal alarm clock buzzer.

So it's about 5:30AM and this sound jolts us out of bed. I reach over and hit the snooze button. Nothing.

I hit the "off" button. Nothing.

I start clawing - still half asleep - at all the buttons and dials... Nothing.

This is when Tamara starts saying "Dave, turn off the alarm clock".

I reach down, and yank at the power cord, which as you know is already unplugged. Now, I'm pretty much awake, but still sleepy enough to act more on impulse; picture me, in boxers and a t-shirt, slamming this cube-clock on the floor repeatedly like a caveman trying to crack open a coconut.

Now I'm fully awake holding this buzzing plastic brick. My next inclination was to throw it off the 16th floor balcony. Remembering my training in law, and that Americans are very litigious, I nixed that idea. I next considered throwing the clock into the elevator down the hall and delivering it to the lobby with the press of the "L" button.

After verbalizing that idea to Tamara, the thought then crossed my mind to try plugging it back in...and...the sound stopped. I'm not sure if this is to prevent people from stealing it, or if it's just a way of making sure a person doesn't oversleep in a power failure (both explanations, by the way, have flaws with their respective reasoning) but whatever reason exists, we were not amused.

Now on to the GOOD PARTS of the day!

Since the weather was a bit chilly to go swimming in the Atlantic, we decided to go fishing instead.

Needless to say, we didn't catch any fish however I caught a clam (with the anchor). 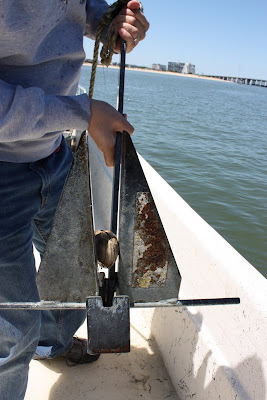 Our next stop today was the Aquarium. 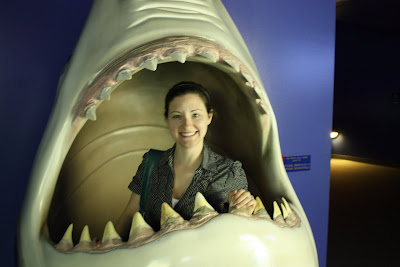 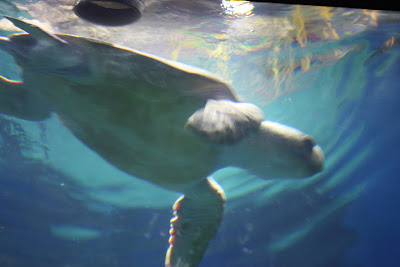 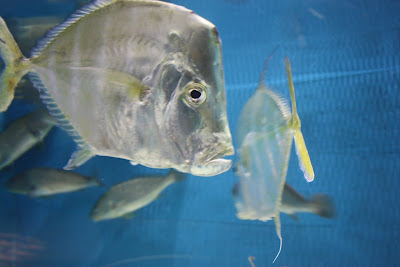 Finally, we drove back to the hotel. The main road to the hotel (where most hotels and tourist attractions are) is Atlantic Avenue.

Atlantic avenue reminds me of watching a city scene in "The Flintstones". Every block has a series of stores which repeats itself on the next block. Each block has a Subway restaurant, a "Sunsations" beach department store, some kind of raw bar, a pizza place named Giovanni's, Lorenzo's, or "Papa"-something and a "frozen custard" place.

Just as an example, take a look at the full list of locations of "Sunsations" in Virginia, particularly the 9 locations in Virginia Beach. 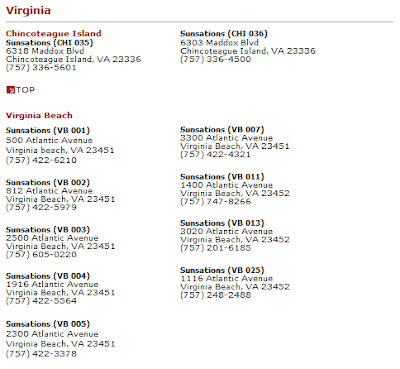 Tam and I ended the day playing 3D mini golf. It's exactly what it sounds like; it's a cross between a 3D movie and mini golf (lots of black light and visual distractions).

Finally, a word about my prediction for the Celebrity Apprentice episode last night.

For those of you who watched the episode, you KNOW that my prediction SHOULD have been 100% accurate. Since the very first episode, my least favorite contestant has been Cindi Lauper. I have been waiting for the moment when The Donald would tell her his famous catch phrase, "you're fired". Last night I predicted Team-Rocksolid to win and Holly to be fired. if you watched the episode, you know that Rocksolid won and Holly was the most likely candidate to be fired. Somehow, Cindi Lauper managed to talk herself into getting fired at the very last minute. I never thought I would be so disappointed to see her go, but it was the wrong decision, for the wrong reason. ARGH! Oh well.

On that subject, I may as well use this opportunity to make my first of next week's two predictions. It's sad to say, but I predict that my personal favorite celebrity on the show, Maria Kanellis will be the one "auto fired" next week. (There are only 5 contestants left and Trump is apparently going to fire one right away, followed by firing two more after interviews making way for the final showdown).