Day 9: Across VA to Virginia Beach

Hello all, David here again. We were on the road today.

We have been on our trip for just over 1 week and here is a summary:

Number of days on the road: 8
Number of hours physically spent in the car: 24
Number of states travelled through: 11 (+ 1 territory)
Number of oysters I've eaten: 61
Number of correct predictions for The Celebrity Apprentice: 1/1 (see below for my next prediction)
Number of fights so far: 0

So we left D.C. and drove to Richmond, VA where we had lunch. 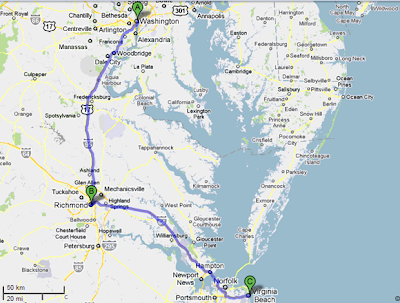 The drive from there to Virginia Beach was very nice and scenic. As you can see from the map, Virginia Beach is right below the tip of the Delmarva Peninsula. "Delmarva" is of course a portmanteau for the names of the three states on it (Deleware, Maryland and Virginia in the south.)

The accents have begun to get thicker and the ads for Bail Bonds have been increasing the further south we go. Also, more and funnier personal injury lawyer ads.

We arrived to a beautiful view of the Atlantic Ocean from our hotel room and entertaining (albeit very loud) live music being performed outside our window. Songs have included everything from Prince to the Dave Matthews Band and everything in between. 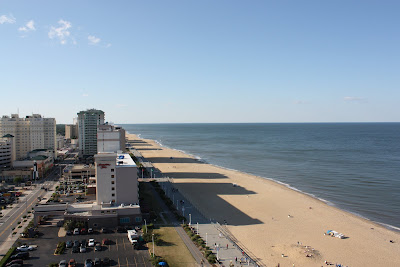 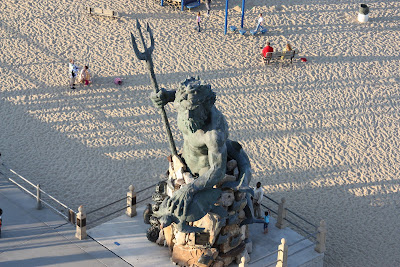 Regarding The Celebrity Apprentice tonight, I am going out on a limb and predicting an upset. I am predicting that the team of arguably the two most popular contestants (Brett Michaels and Cindi Lauper) will lose. I further predict that project manager Holly Robinson Pete will be fired and Brett will avoid a close call. Curtis, who I believe would have been fired (and who Tamara predicts will be fired) if his team lost, will be able to save himself for another week or two.

Well the sun has now set on day 8. All the best to everyone back in Ottawa and Montreal (and elsewhere) following our adventures. 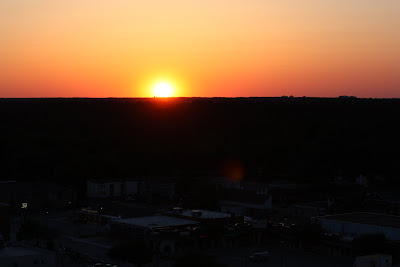