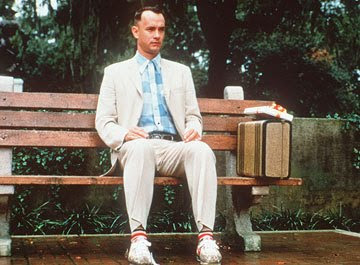 "Life is Like a Box of Chocolates"
Iconic words uttered by Tom Hanks while sitting on a park bench located in Chippewa Square in Savannah, Georgia.

In the two short days I have been here with Tam, I have come to notice that Savannah has a rich history and many notable features.

What I can describe as a mix between Old Montreal, Brockville, and Forrest Hill Toronto, Savannah, GA is a small but nice place to be.

Founded in 1773, there were 4 things that were originally not permitted in the city:

Not exactly a place for me to take up my chosen profession... but I digress.

On that subject, Tam and I picked today to peek into the local courthouse just to see what was going on there.

Courtroom #1: A scene right out of judge judy. What appears to be small claims civil cases, we get to see some unrepresented dude getting chewed out by the local small claims judge about how he needs to get a lawyer. As soon as I realize it's a civil case, I headed for the door.

Courtroom #2: Also a civil case although we got to see the judge instruct a jury on their role which was interesting.

Courtroom #3: Some poor guy in a jail jumpsuit explaining to the judge why he wanted to fire his lawyer. I say "poor guy" because from what I gathered his alleged decision to participate in an armed robbery will, apparently result in him going to jail for a total 135 years if found guilty.

Editor's note: as Tamara reads over my shoulder she says scoffingly, "pfft! poor guy! he did it!"

Sigh... good thing she's not on any of my clients' juries.

I wonder what the perpetrator of this grafiti would be sentenced to? 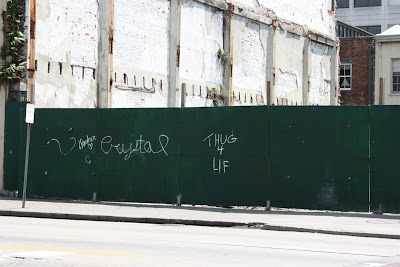 Afterwards we went for lunch at Paula Deen's Lady and Son's restaurant.

Editor's note: at this point Tamara chimes in "where Tamara ate so much that here we are at 11pm and I haven't eaten anything since, and I'm still stuffed!"

Well, that pretty much sums it up. Gotta love good southern cooking.

After lunch we kicked around the bed and breakfast playing scrabble and shootin the breeze. Tam and I both made 7 letter words.

It's our last day in Savannah as we are on the road towards Florida tomorrow!