All good things must reach their halfway point. Here are the stats to date: 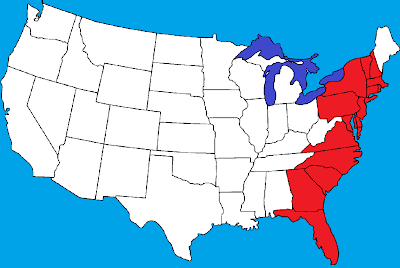 So we are here in Panama City and, first things first, ALWAYS remember to adjust your clock when you change time zones. We are now in the Central Time Zone and we didn't realize that last night - wondering why we seemed to be an hour early for everything. We'll be in this time zone until just after Chicago.

Our itinary has also changed somewhat. Our revised itinary is now:

So far this trip has been phenomenal; it has been a great chance for us to see a lot of North America and to spend a lot of time together. We have still not had any fights! To our surprise, Americans are a lot less obsese than we were expecting. I also noticed that when an old man starts telling a story, random strangers stop and listen. One not so nice difference is that when you say "thank you" to a person Tam often finds that the answer they give is "uh huh".

All in all it has been a great way to see the subtle differences in culture as we cross from state to state.

Panama City has been a good time so far. It has a carribean resort feel while still feeling like we're in the United States. We're staying at the Marriott which has a boat that goes out every hour or so. The boat takes us to an island known as "Shell Island". On the island we were able to relax on the beach and go swimming in the Gulf of Mexico.

On the trip to and from Shell Island we were able to see dolphins swimming and diving.

At Shell Island, while swimming, I was approached by a school of Skates. These fish which are about 3 feet wide and resemble the stingray are harmless. Most of the time they avoided me and the other people swimming, but when I was very still, the school of them would swim by my arms and legs.

That's all for now. Tam and I are both really looking forward to the second half!