Dave here to recap our 3rd day. First let me say that my prediction as to who would be fired on the Celebrity Apprentice (as revealed in last night's blog posting) was correct. Now down to business...

Our day started a bit late today as we both slept in. After our lazy start and a late breakfast, we decided to take a driving trip to explore the area around Boston. We drove through Cambridge, Watertown and Brookline, making a big circle returning to the Hotel with not much to report.

Tamara did some shopping at some place (yes, I know, I should know where but these are the kinds of details I forget and Tam is sleeping now so it's probably better if I don't wake her). Suffice to say I relaxed back at the hotel room while, apparently on her way back, she was caught in a large thunder storm.

The highlight of our day was a pre-planned trip to "America's Most Beloved Ballpark" Fenway Park to watch the Los Angeles Angels of Anaheim play the home team Red Sox. Tamara and I, decked out in our Montreal Expos gear, headed off to Fenway. 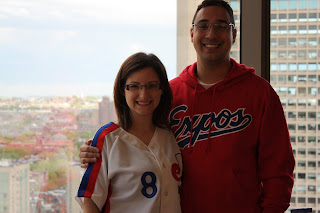 For baseball fans, Fenway is a historic landmark which opened in 1912. For non-fans, Fenway is a well known open air baseball stadium most notable for the unusually large home-run fence in left field referred to as "the Green Monster".

Well, to make a long story short, the Green Monster was no obstacle for the Red-Sox. Starting with two Home Runs in the 2nd inning (both over the Monster) the game took off as a high scoring shootout.

It was 7 to 4 for the Home Team in the 6th inning when Boston finally busted the game open. The rally began with this play.

With one out and J.D. Drew on first base, Mike Lowell (the Designated Hitter) doubled to left. Drew rounded third plate and charged for home plate.

The throw came in... 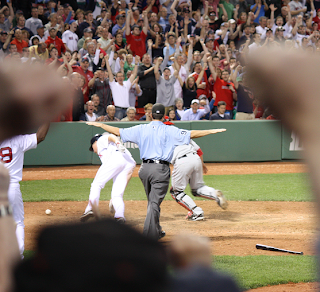 Safe at the plate! This would be the second of seven runs to be scored that inning. A four run, 9th inning rally by the Angels proved to be futile as the final score was 17-8, an unusually high score for a baseball game. 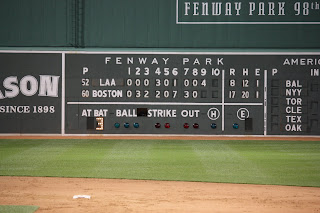