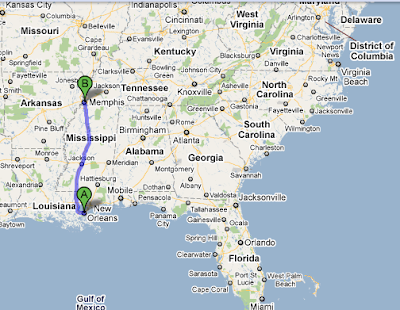 On the road again. As mentioned this was our longest drive of our trip (about 6 and a half hours). We left New Orleans early this morning. We drove through Jackson, Mississippi however we didn't see anything worth stopping for so we continued straight through.
Before arriving in Memphis, we crossed over into West Memphis, Arkansas just to make sure we stepped foot in the state. Upon further look at our itinary, we will be driving through Arkansas when we leave Memphis. In any event, we decided to make use of our trip into Arkansas. As we have been on our trip, we have noticed numerous billboards for the Powerball lottery. Over the past few weeks, the jackpot has grown to 220 million dollars. How could we resist.
We stopped at a local convenience store. I walked in and got in line behind a guy holding a bottle of Colt 45. As I got closer to the front of the line, I realized that the front counter did not contain gum or cigarettes but rather 7 different kinds of fried chicken. How could I resist that as well.
So after buying fried chicken and powerball tickets (wish us luck), we were walking in memphis!
Memphis is a a nice city which, at least in my opinion, resembles Montreal in many ways (architecture, city design, nightlife etc). Tam also sees many of the similarities. Our hotel is about half an hour outside of the city but after checking in we headed into town for dinner. After dinner we walked around and took in the local street festival.